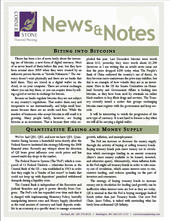 There has been a lot of news lately about the increasing use of bitcoins, a new form of digital currency. Most of us never heard of them before this year, but they have been around since 2009 when they were created by an unknown person known as “Satoshi Nakamoto.” The currency doesn’t exist physically and there are no banks that hold them. They are stored in a digital wallet on the cloud, or on your computer. There are several exchanges where you can buy them, or you can acquire them by selling a good or service in exchange for bitcoin.

Because no banks regulate bitcoins they are not subject to any country’s regulations. That makes them easy and inexpensive to use internationally, and helps small businesses because there are no credit card fees. While the number of businesses who accept bitcoins is still small it is growing. Many people lately, however, are buying bitcoins as an investment. That is because their value exploded this year. Last December bitcoins were worth about $12; yesterday they were worth about $1,200 (however as I am writing this an article news came out that the price dropped $200 today when The People’s Bank of China outlawed the country’s use of them). As they become more mainstream the price may stabilize, but this is an example of how volatile they are as an investment. Here in the US the Senate Committee on Homeland Security and Government Affairs is looking into bitcoins, as they have been used by criminals on online black markets to buy illicit drugs and services. The Treasury recently issued a notice that groups exchanging bitcoins must register with the government and keep records.

It will be interesting to watch the progression of this new type of currency. It is not hard to foresee a day when we will all be carrying a digital wallet.

We’ve had QE1, QE2, and now we have QE3. Quantitative Easing became a household term shortly after the Federal Reserve instituted this strategy following the 2008 financial crisis. Recently any whisper about the direction of QE bears great influence over stock prices and has caused multi-day drops in the market.

The Federal Reserve System (The “Fed”) which is composed of 12 Federal Districts – otherwise known as the Central Bank of the US – was established in 1913 in order that they might be a “lender of last resort” to banks that could not keep up with depositors’ panicked withdrawal demands during a liquidity crisis.

The Central Bank is independent of the Executive and Judicial Branches and gets it power directly from Congress.  The Fed’s role has expanded over time such that it is charged with implementing Monetary Policy; basically manipulating interest rates and Money Supply (described as the total amount of currency and bank deposits available in an economy at a specific time) to manage economic growth, inflation, and unemployment.

The Fed can increase or decrease the money supply through the activity of buying or selling treasury bonds. Buying treasury bonds puts more money out in circulation which encourages lending in an anemic economy (there’s more money available to be loaned, invested, and otherwise spent). Alternatively, when inflation kicks in the Fed might sell treasury bonds in order to take money out of circulation, which causes interest rates to rise, restricts lending, and reduces spending on the part of investors and consumers.

The strategy of buying treasury bonds to increase money out in circulation for lending (and growth) can be ineffective when interest rates are low as they are today. QE is unusual in that the Fed is buying mortgage-backed bonds rather than just Treasury bonds. Our new Fed Chair, Janet Yellen, is tasked with unwinding what has lately been nicknamed QE-Infinity.

Common sense suggests that in the course of apologizing for an error or injury to another there is a tacit, if not explicit acknowledgment that one is confessing to be at fault. In the case of paying a fine – say for a driving violation – such penalty most certainly confirms one’s guilt (or we wouldn’t pay to begin with!)

Not so with corporations the SEC (Securities Exchange Commission) fines for transgressions deemed to be unscrupulous, unfair, unethical, scandalous and illegal. When publicly reported this news most often includes a statement that the perpetrator does not admit to any wrong-doing. Back in 1972, when they even lacked the power to impose fines (the courts had to do this) the SEC established a policy based on the following understanding: “a defendant’s refusal to admit to allegations is equivalent to a denial, unless the defendant or respondent states that he neither admits nor denies the allegations” (Emphasis added). Hmmm.

Enter Mary Jo White, a former Federal Prosecutor, who is our newest SEC Chair. It is encouraging to hear that she believes a “robust enforcement program is critical to fulfilling the SEC’s mission to instill confidence in those who invest in our markets and to make our markets fair and honest”; and furthermore “we need to be certain our settlements have teeth, and send a strong message of deterrence.”

We already bear witness to her goal – think JP Morgan in the news of late – as Ms. White & Company imposed not only a staggering fine but also extracted a public admission of guilt. Hallelujah.