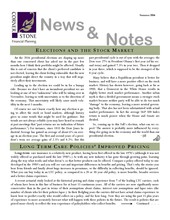 Elections And The Stock Market

As the 2016 presidential elections are shaping up more than one concerned client has asked me in the past few months how I think their portfolio might be affected. Usually this is out of concern that the client’s preferred candidate is not elected, leaving the client feeling vulnerable that the new president might direct the country in a way that will negatively affect their investments.

Leading up to the election we could be in for a bumpy ride. Because we don’t have an incumbent president we are looking at one of two “unknowns” who will be taking over in November, leaving us with uncertainty as to the direction of the economy. That uncertainty will likely cause much volatility in the next 5 months.

Of course we can’t know exactly how any election is going to affect the stock or bond markets, although history gives us some trends that might be used for guidance. But trends are not always reliable (you may have heard us remark at past meetings that “past returns are no indication of future performance.”) For instance, since 1833 the Dow Jones Industrial Average has gained an average of about 6% on average in an election year. The first and second years of a president’s term see average gains of 2.5% and 4.2%. But this past presidential cycle is out of sync with the averages: the Dow rose 27% in President Obama’s first year (of his second term) and gained 7.5% in year two. Then it dropped in year three, which is supposed to be the strongest of the 4-year cycle.

Many believe that a Republican president is better for business, and will have a more positive effect on the stock market. History has shown however, going back as far as 1900, that a Democrat in the White House results in slightly better stock market performance. Another urban myth is that a divided government means a stronger stock market because neither party will be able to do too much “damage” to the economy, leaving a more neutral governing body. That also has not been substantiated with actual market performance. In fact the average S&P 500 Index return is much poorer when the House and Senate are divided.

So, coming up to this Fall’s election, what can we expect? The answer is probably more influenced by everything else going on in the economy and the world than our presidential election.

Long-term care insurance is a relatively new product, having been first offered in the late 1970’s (although it was not widely offered or purchased until the late 1980’s.) As with any new industry it has gone through growing pains, learning along the way what works and what doesn’t, so that better products can be offered. Compare a policy offered today to one developed in the 1980’s and you will see vast and important differences in benefits and pricing. That’s why the stories you hear from friends and family about huge increases in premiums, or the difficulty in collecting benefits, should be ignored. What you can buy today in an LTC policy, as compared to a 20 or 30-year old policy, is more benefits, broader services and a better claims experience.

A recent actuarial study looked at the historical pricing and claim experience from 7 of the leading LTC carriers, each of whom have been in this line of business for at least 15 continuous years. All of the carriers are now significantly more conservative than in the past in terms of their assumptions about claims, interest rate assumptions and lapse rates (the number of clients who let their policies lapse.)  In their fledgling years the carriers did not have actual claims experience to know how to predict exactly who would collect on a policy, and for how long. Now they are using the past 15 plus years of experience to more accurately forecast what will happen with these policies in the future. The result is policies that are priced more closely to reflect the true experience of policyholders who collect benefits. Thus the potential for needing to increase premiums on policyholders in the future should be greatly reduced. As a result, where policies sold in 2000 faced a 40% likelihood of a rate increase, and policies sold in 2007 faced a 30% likelihood, policies in 2014 have only a 12% probability of a rate increase.

We routinely discuss long-term care insurance with our clients over age 50 because we feel it is an important tool in covering the cost of medical expenses in retirement. Don’t be scared off by what you hear from friends and neighbors. Today’s policies have better benefits and more consistent pricing.

Wandering about the city these days one notes that Portland’s identity is again lost to tourist season (good, bad? At least temporary!) Our national sense of identity is shifting too, as among other things, we bear grimacing witness to a presidential campaign smeared with potty talk and other cruel insults. Britain, Europe and the rest of the world face their own identity crisis following the Brexit vote. No doubt change is in the wind at a macro global level.

The implications of last week’s vote have by now been overanalyzed, turned inside out and upside down, and all the potential for negative fallout fully assessed. What re-mains of interest, however, is a possibility for positive change. There’s a strength emerging from the common voice of the 99-percenters—from the Occupy Wall Street movement, from the Arab Spring Rising and now from what is referred to as the “Peasant Uprising”. Viewed from a different angle, perhaps this isn’t about nationalism or immigration or the poorly educated making uneducated decisions, and more so relates to the fact that money and power begets more money and power and leaves in its wake innocent hungry children whose futures are forever compromised . . . a veritable trail of tears.

Change is rarely comfortable, often ugly and painful, but offers a potential for growth and improvement un-measured by dollars, pounds, or euros. So I ask myself, what is this newly evolving identity and what role should be mine? What obligation do I bear individually? Lounging comfortably in a chaise overlooking sun-drenched Casco Bay on a bright and glorious day I watch brave tiny Chick-adees mobbing an elite over-bearing fish hawk. And won-der, am I a bird of prey?

We held a ribbon-cutting ceremony and open house to celebrate our new Union Wharf offices. Mayor Strimling presided. Oysters on the half shell (from BP’s Shuck Shack) and Jumbo shrimp cocktail (by Vinnie) rounded out other delightful delectables provided by Foodworks of India Street. We are grateful to our many guests who helped create this festive and happy event.

In May Jill, Susan and Mackenzie attended a NAPFA (financial advisor’s) conference in Phoenix. Jill and Macken-zie sidetracked up to Sedona and then to the Grand Canyon.

In early June the staff participated in United Way’s Day of Caring. We helped build the Born Learning Trail for young folks at Memorial Park in Biddeford. We just love primary colors!

Carrie, a Disney Certified Travel Agent (and big fan) is excited to have already landed some 2017 bookings!

Taylor and CJ moved into their new home in Topsham.

Mackenzie is developing her own blog with the aim of providing financial guidance to Millennials.

All The Light We Cannot See by Anthony Doerr

Dickins A Tale of Two Cities

Fluke: The Myth and Math of Coincidence by Joseph Mazur

Compilation of Great Tales of Horror & the Supernatural

No Greater Love by Duncan Howlett